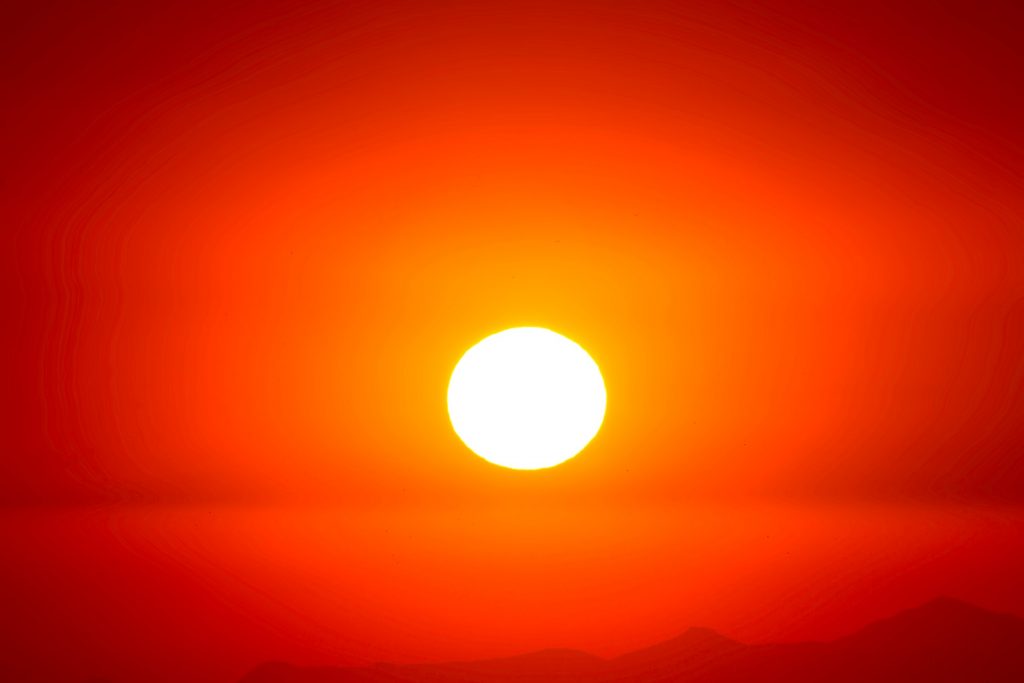 Any reduction of the light spectrum using filter lenses triggers a lot of discussion. Even with UV420 lenses, there are many arguments for and against in the market and some even ask the question whether the lens industry will soon recommend protecting the eyes by not letting in any more light at all. The simple background to this discussion is the continuously rising life expectancy of the population in developed countries and the understanding that for the foreseeable future it won’t be as easy to replace the “worn out part of the eye” as it is, for example, to replace a hip.

While incidences of cataracts and AMD were characteristic of the later years of life in the 1950s, patients affected today are typically in the middle of their lives, possibly in a job and needing their eyesight more than ever to use digital media, smartphones, etc.

Thus all these efforts are simply aimed at keeping the harmful effects as low as possible over the entire lifetime, in order to delay the inevitable onset of signs of wear and tear to as old an age as possible.

After initial suspicions that UV light could be harmful in the middle of the 19th century, Crookes sun protection lenses appeared in 1913, guaranteeing 100% UV light protection. In 1908 the Swiss ophthalmologist Alfred Vogt succeeded in proving its harmfulness. In 1926 he published his conclusions that ultraviolet light has a damaging effect on the eye, pointing out at the same time that infrared radiation was likely to have a similarly damaging effect.

In 1930, the first sunglasses were produced in series, with the main focus still on glare protection. In addition to the fashion aspect of sunglasses, protective standards such as the recently developed EN183 were introduced which speak of complete UV protection as soon as there is absorption of 95% in the range up to 380 nm. The more popular standard – which every end user knows – in the meantime is the UV400 quality seal, which also takes into account visible light and the amount of harmful high-frequency blue light blocked.

Infrared protection has received little attention so far up to now.

Interestingly, the same was true for infrared protection in the field of dermatology until the topic was rediscovered a few years ago. Far from a purely “marketing gimmick”, but from the field of environment-related molecular aging research, the development of sunscreen creams was initiated, which in addition to pure UV protection also offer infrared protection. In this connection, premium manufacturers now often make the claim: “Without infrared protection, you are only half protected against the sun”.

If one compares the proportion of UV light striking the earth with the amount of infrared in the sun’s radiation, the question inevitably arises as to why this topic was not addressed much earlier. There seems to be no point in unnecessarily exposing one’s eyes to heat radiation. 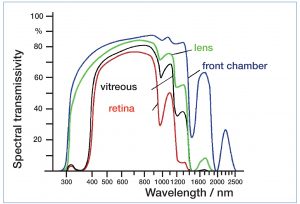 Amounts of UV light and infrared light striking the earth due to solar radiation.

According to the findings of the Association for Radiation Protection, wavelengths of light between 780 and 10,000 nm can cause significant thermal damage to the eye. It is important here to make a distinction between work safety protection and sun protection, because the spectrum of sunlight hitting the earth is completely different from that e.g. when working in front of a blast furnace. Thus the relevant area of ​​consideration in this context is the frequency range up to 2,500 nm. 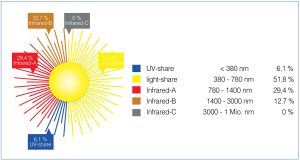 Depth of penetration: What impinges where on the eye?

A significant proportion of the dominant infrared (IR)-A component in sunlight in the range up to 1,400 nm penetrates to the retina. This follows the general rule: the shorter the wavelength of the IR radiation, the greater the depth of penetration. This particularly affects the choroid which can be damaged by IR-A, leading to localized defects in the retina tissue. Only a small proportion of radiation with wavelengths longer than 2,000 nm gets through the cornea. The anterior chamber of the eye absorbs all radiation above 2,000 nm. All wavelengths greater than 1400 nm are filtered out by the lens and vitreous part of the eye. 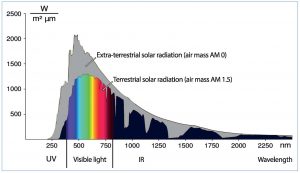 Significant radiation in the wavelength range of 400 to 1400 nm can fall on the retina. The infrared radiation energy that the eye absorbs causes it to warm up (Vos and Norren 2004, Brose et al. 2005). The exact mechanism by which long-term exposure to IR radiation leads to clouding of the eye lens (cataract) is still not fully understood (Brose et al. 2005). It is also difficult to distinguish between the fundamentally multifactorial-related development of cataracts and numerous other biochemical changes – in particular changes in the composition of lens proteins with increasing aggregation of insoluble high-molecular proteins – and cellular changes that are genetically modified and are affected and exacerbated by environmental factors (Truscott and Zhu, Michael and Bron 2012).

Not for nothing are certain kinds of cataract referred to as fire cataracts or glassblowers’ cataracts. The effect of infrared radiation on such a condition is difficult to prove due to its development over a very long period and thus it is difficult to setup a test, but it is considered very likely.

A general distinction must be made between the front and rear parts of the eye. Where protection of the lens with regard to sun protection is concerned, the infrared spectrum from 780 to 2,500 nm is of interest​​, whereby the anterior chamber of the eye already offers fairly good protection between 1,300 and 1,500 and above 2000 nm.

The well-known reasoning that a reduction in the transmission of visible light (e.g. through standard sun protection of 85%) leads the eye to adapt to the light conditions, thus in the case of lenses without UV protection letting in more UV radiation than untinted lenses, can be transferred 1: 1 to the infrared problem. In other words: wearers of sunglasses without infrared protection expose their eyes to more IR radiation than if they were not wearing sunglasses at all.

As a consequence of increased life expectancy, no opportunity should be missed to limit potentially harmful external influences – particularly on the retina – to an absolute minimum. Ultimately, this is exactly what we have been doing in our industry with regard to UV protection for decades.

Simulation of the effect on the transmission change on the respective medium – black without the coating / red with IR coating.

It is an added value that can be easily explained to the end user. Ideally, in time it should be recognized with a similar stamp of approval to UV400. Moreover, this additional protection would highlight the distinction between our products and those of the fashion sunglasses industry.