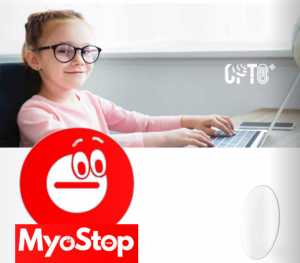 The Italian startup Opto+ has developed the first cloud LDS which is able to create special lenses for treating myopia at the earliest stage. Myopia is the most common eye problem, affecting right now 1.5 billion people. Studies have been shown that in the future we will have six billion of myopes by 2050, making it the leading cause of permanent blindness, increasing the risk of glaucoma, cataract and retinal detachment.

Now, this may sound scary – and in fact it is, because until now there’s no effective way of treating short-sightedness at the early stage. Another misconception that has been going on for decades in the ophthalmic world when it comes to myopia treatment is that we have always accepted that it could just get worse, with no way to reverse this eye disorder. The reality is that part of this misconception is due to the fact that we have always been using high dioptre lenses that correct myopia with an aggressive approach, which has been shown to not be effective. In fact, over time, using this strategy causes the eyes to suffer from visual fatigue and eventually this brings the worsening of myopia itself, announced the company.

So, rather than that, a conservative approach bringing results in the long term is suggested – because making long term plans when it comes to short-sightedness is crucial. With this in mind, Opto+ has been able to find a solution for improving children ocular health and preventing myopia from potentially affecting their future lives. Its name is MyoStop, a lens design that runs a lot of complex algorithms and mathematical calculations, ready to be used by every ophthalmic lab all over the world.

The process of the Opto+ LDS lens creation process

1. First of all, the ophthalmic lab gets an order for a pair of myopia glasses, with all the parameters; the lab technician starts putting the parameters on the software and selects the MyoStop design.
2. After only a few seconds, Opto+ performs all the math calculation on the cloud and returns all the files ready for the generators/freeform machines.
3. Thanks to an integrated 2D/3D lens mapper software (the Opto+ View), the lab technician can check the lens before making it. This is also called the “pre-print” process.
4. If the pre-print is fine, he can proceed with making the lens, otherwise goes back to 1 until he reaches the correct result.

The image below clearly explains how traditional myopia lenses work: the central part of the image is projected on the retina whereas the peripheral parts are projected behind the retina. 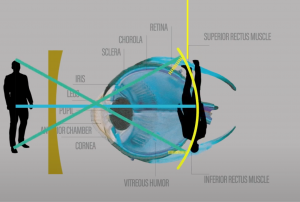 Over time this leads to the creation of a blurred image on the peripheral area. Consequently, the shape of the bulb will tend to adapt to the projected image, causing the myopia to worsen. With MyoStop, both the central and peripheral parts of the image are correctly projected on the retina, effectively reducing the axial growth and ensuring a clear vision on the whole lens area.

We are obviously slowly embracing an important change in lens technology, which will improve our children’s eye health.