WHO publishes report on eye health 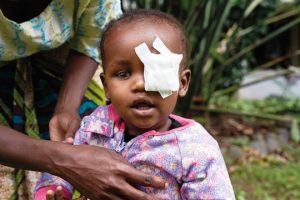 Abdul from Tanzania had glaucoma and was operated. Picture: Manuel Ferrigato

2.2 billion people worldwide have to live with visual impairment or blindness, with one billion of those cases being preventable or treatable. This is what the World Health Organization’s (WHO) World Health Report (WHO) published for the first time. The most common causes of this are short-sightedness and hyperopia as well as glaucoma and cataract.
“36 million people are blind today. People in poorer regions of the world are particularly affected, where most people have no access to simple surgery, glasses or rehabilitation. As a result, millions of children and adolescents cannot attend school and women and men cannot care for themselves and their families, “said Rupert Roniger, International Director of Light for the World.
According to the WHO report, at least 2.2 billion people live with visual impairment or they are blind. One billion people are still unprotected today – they need glasses or surgery, and in many cases, visual impairment could have been prevented by timely treatment. Currently, 65 million people are blind or visually impaired due to cataracts – they could be treated by surgery. 800 million people have no access to glasses. To treat short-sightedness, hyperopia and cataracts it would need the sum of 13 billion Euros worldwide, calculated the World Health Organization. Light for the World is calling on governments, businesses, foundations and civil society organizations to step up cooperation and provide the resources needed to provide access to healthcare for all concerned.