Born out of necessity

How a company combated the Corona Virus –

a personal report by Norm Kester

For us in the United States, everyone of certain age remembers exactly where we were and what we were doing on September 11, 2001. The memories of that day and the following weeks are forever etched into our memories. I didn’t live through many of the past events that previous generations had etched in their memories: The Great Depression, World War II, and so many others. The Corona Virus Pandemic is just such an event. I remember watching it unfold. Thinking that this was another Ebola or SARS. That this was an event in another country. Another place. When we were leaving for Italy, on our way to Mido, and the event was cancelled, it got real.
By Norm Kester

In days, it was known to be in the US. Then people started dying in Seattle. There was an epicenter near our daughter’s house just outside of Seattle. She, and her husband, came to visit us from Seattle as this was unfolding. They stayed for a couple of days and then headed home. On their way, they got sick. Then we got sick. We quarantined ourselves and got a COVID-19 test. A swab up the nose in a drive-thru testing facility and a quick negative for Flu A and B. We were told to stay put in our house until the COVID results came back. We started feeling better at day 4. Day 10 we got our results. Negative. As we watched things start to unfold around the world, and we began to watch the US shut down, I became filled with the impatience that comes from things being out of my hands and out of my control.

From my home, I started researching everything that was known about viruses, enveloped viruses, bacteria, fungi and a variety of other microbes. As I learned (thank you internet!) everything I could, it became quite clear that this was something that I could contribute to, that Quantum could contribute to. I quickly found the 222 nanometer light invention that could kill virus and bacteria in the air. I sent that information to everyone I knew in government, the medical community, and my friend and colleague networks.

At this time, as I was researching all of this (this was over a two day period), it occurred to me that I had not reached out to any clinics, hospitals or doctor’s offices in our local area.  That day, before I returned to work from my quarantine, I emailed the presidents of our two local hospitals, sent a LinkedIn message to the head of our Urgent Care chain of clinics, and called my general practitioner.

The next morning in my office, I received a call from Brad Converse. He explained that he too was trying to get into this fight, that he owned a company making custom golf putters and was an engineer. He wanted to create a group called “The MacGyver Group” to assemble engineers, businesses, doctors, nurses, 3D printers, and sewists to work to solve whatever issues we could. He set up a Slack channel, and I quickly joined in.

Quickly, Quantum was knee-deep in making hand sanitizer and spray disinfectant to meet the needs locally. We worked on ventilator issues at the hospitals. We worked on creating replacement HEPA filters… there was a worldwide shortage. PPE of all types were running out. 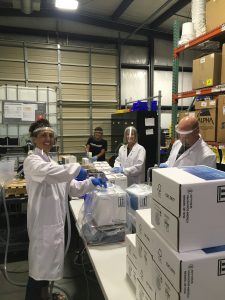 We worked with friends and other businesses to create isolation gowns, and a friend quickly repurposed his company (normally making medical knee braces) to make isolation gowns and parts we needed for face shields.

People were sewing masks, and 3D printers were printing face shields. A local company, which normally made X-ray film, made the shields – 80,000 at a time. We at Quantum volunteered to operate as the central hub to sanitize and sometimes sterilize things being made in the community before they went into the hospitals.

I am so proud of everyone at Quantum. They worked tirelessly. Our whole company pivoted in just a few days to work on whatever the hospitals needed. Pallets of hand sanitizer and spray disinfectant started going out. The sense of urgency around everything we were doing was incredible. People were dying.

The ecomomy collapsed but the MacGyver group met daily

All the while, we kept everyone employed. We were burning through cash like crazy. The economy was completely closed. Our sales went to 10% of normal, and companies weren’t paying their existing payables. This wasn’t sustainable, but we committed to ride it all the way to the end together, unified as a team driven with purpose, to do everything we could until we had to close the doors.

Emotions were high. There were hugs and high fives, but there were also tears, worry and fear. We met with everyone every day. We shared what we knew as leadership. We met with the hospitals and the MacGyver group daily.

Tensions in the hospitals were high as well. The PPE shortage was a crippling problem.  Though the MacGyver group was able to solve some crazy problems and most of the PPE issues, isolation gowns and N95 masks became major problems to be solved.

A plan arose: UV-C should kill the virus

During this time, I became more and more convinced to use UV-C to kill (inactivate is the correct, scientific term) the Corona Virus. I had read every paper I could from the Centers for Disease Control and Prevention, the National Institute of Health, the World Health Organization the Food and Drug Administration and any other reputable source on how to reuse N95 masks.

Several of these papers were written during the Ebola and SARS outbreaks. During these events, global pandemics became apparent and emergency preparations and studies were conducted. Vaporized hydrogen peroxide and UV-C rose to the top.

I spoke to several of our engineers about the idea and what I had in mind. Together, we hatched a plan to buy some toaster ovens or microwaves and retrofit them with UV-C bulbs and create some prototypes to test the effectivity against the Corona Virus. We discussed it on Friday, and by Monday we had our first prototype. 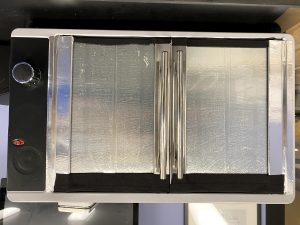 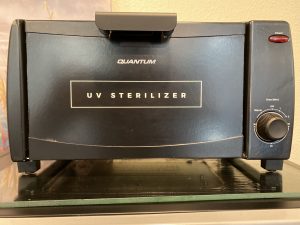 The engineering team jumped in with both feet. Very quickly they discovered testing and measurement effectivity cards, dosimeters, and how much energy it took to inactivate just about every microorganism on earth. We showed the hospital our prototype and our calculations and measurements. The hospitals were already familiar with UV-C; they even had dosimeter cards that they used when working with UV-C. The main problem was still how to disinfect at the scale that was needed. Thousands per day were the projections. Our little toaster ovens wouldn’t do the trick. We would need thousands of them and fast.

I decided to send our little toaster oven off to have it tested. I wanted to test it against the actual Corona Virus, but all of those laboratories were consumed by other efforts. We found, through some great friends and colleagues, a testing facility at the University of Tennessee. They agreed to test against other, similar viruses.

On the MacGyver Slack channel, we had ready access to emergency room doctors, infectious disease specialists, respiratory therapy doctors, frontline doctors, surgeons and a whole host of others. We discussed and brainstormed how to solve this issue quickly. I proposed a shipping container with UV-C bulbs. I found a procedure from the University of Nebraska and they were disinfecting entire rooms full of N95 masks. There was hope that we could do this in large numbers.

Desinfection in a shipping container 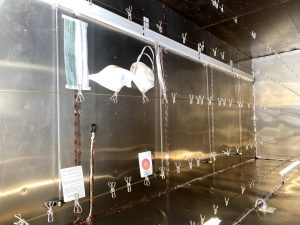 Over the next few days, the hospitals decided to put one at each hospital location. We then had to buy 2 more shipping containers and get to work on making them. The problems and logistics we had to overcome were too numerous to list here, but we did it! In just three weeks, we went from concept to our first shipping container. We would be able to disinfect 84,000 N95 masks per day.

I started our team on taking the toaster oven concept and making a real device out of it.  They started to design and model it. They quickly built a prototype. We put the device out to bid. We wanted to follow our normal manufacturing method and make it in Oregon. Many things fell into place that normally would not. Many businesses were closed or had no business coming in the door. We found a great partner that could bend all the aluminum we needed. Logistics were a major issue, but we were not going to be stopped.

We received the Payroll Protection Program funds! This gave us the lifeblood we needed.  We knew we would get through all of this. Just as we approached our last two months of operating cash, the federal money hit our account.

Then our test results came back from the University of Tennessee. We had done it! We inactivated the virus. Not only that, we were successful at fully removing the virus from an N95 mask! This was quite an accomplishment.

But I still wanted more …

I wasn’t satisfied with the results. I wanted to actually inactivate the Corona Virus that was responsible for the pandemic. Through connections and relationships, we found a BSL-3 (Bio Safety Level) that was working with the actual Corona Virus.

We started talking to retailers, optometrists and manufacturers and labs about the UV-C solution. We learned a lot about what they were facing and the rules and regulations coming their way.

I wasn’t getting much sleep during this period. My recollection of how exactly we got connected to some Luxottica folks is unclear, but I do know that they were very involved in Italy and offered to test our device with the actual Corona Virus, SARs-CoV-2. We didn’t have our results back from our new test facility. We jumped at the opportunity and sent several of our UV-C devices to Italy.

Our people at Quantum jumped in with both feet. We did so much as a team during this time. These people were amazing. There was never a moment where there was doubt. We just attacked each obstacle.

A new company was born out of necessity

Our team ended up making the FusionUV, a 254nm light, germicidal UV-C disinfection unit.  We have now shipped thousands of them all over the world to inactivate the Corona Virus.  We have now tested it against all sorts of microorganisms. We’ve inactivated or killed them all. We scramble the RNA or DNA of these microorganisms. They don’t have a natural defense to this wavelength of light. Our atmosphere filters it out.

We’re now making different sizes. We’re making rugged units. We continue to test with every germ we can. We continue to learn and improve. We’ve started a new company just to make and explore new ways to use UV-C. It’s called Boon. Not just because of the definition—a thing that is helpful or beneficial—but because we wouldn’t have made this device if it wasn’t needed. If we hadn’t had a Pandemic. It was born out of necessity. 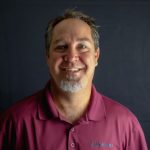 Norm Kester, the President of Quantum Innovations, Inc. since 2002 has dedicated himself to manufacturing AR and mirror coating equipment for the ophthalmic industry. The entrepreneur steers his company according to the principle ‘attitude of servitude’ because he firmly believes that it benefits all parties involved in business together.  This year he was awarded for his contribution to the advancement of the optical industry with the 2020 Goodfellow award by the California Lab Committee.Before founding Quantum Innovations, Kester served as Vice President at Satis Vacuum of America. He studied Optical Thin Film Coating Technology at the University of Rochester and received further training in the US Navy Advanced Electronics Program.