Ocuco being named one of Ireland’s Best Managed Companies 2022. 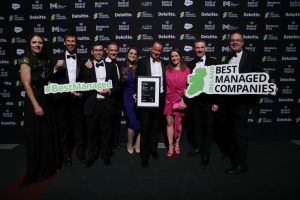 Ocuco has been named as one of Ireland’s Best Managed Companies 2022. The company, which demonstrated superior business performance for the fifth year, was recognised with a gala awards ceremony at The Convention Centre, Dublin, on September 29. The awards programme is led by Deloitte Ireland, in association with Bank of Ireland.

Commenting on the award, Leo Mac Canna, Ocuco CEO, said, “It’s an honour to be nominated as one of Ireland’s Best Managed Companies for the fifth consecutive year. It is a credit to our Management Team, but above all, to each and every Ocuco employee. Thanks to Deloitte and Bank of Ireland for running this fantastic event, which we are thrilled to be a part of.” Mac Canna added that the framework provided by Deloitte provides an excellent foundation for examining management strategy.

Ireland’s Best Managed Companies Awards programme promotes and recognises excellence in Irish/Northern Irish owned and managed companies and is the only award scheme on the island of Ireland that considers a business’ performance from every perspective. The companies received recognition following a detailed judging process that evaluates the entire management team and business strategy in some of Ireland’s top privately owned businesses, looking beyond financial performance at areas such as a company’s environmental, social and governance standards, strategic planning and talent strategy.

Ocuco is the leading provider of OmniChannel solutions to the eyecare retail, optometry and lab markets worldwide. Ocuco’s flagship global products are Acuitas and Innovations.