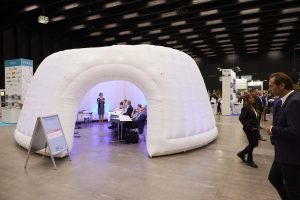 After the gradual easing of the corona regulations in Austria, preparations for the 2nd high-tech trade fair W3+ Fair Rhine Valley are once again picking up full speed. With its event date in September, the fair will be the start of the second half of the business year. The new accompanying high-tech congress, N-Tec Talks, will focus on the new start after the lockdown and show companies opportunities in the three thematic areas of “Product Technology”, “Procurement and Production” and “Management”.

Provided that Austria further relaxes the regulations, the W3+ Fair Rheintal will take place as planned on 23 and 24 September 2020. The fair will then open – as probably one of the first events after the corona break – the eagerly awaited autumn season. For the second time already, the high-tech platform is calling experts from the optics, photonics, electronics and mechanics sectors from the four-country region of Austria, Switzerland, Liechtenstein and Germany to the Dornbirn exhibition center. Together, the experts are looking for new technological solutions that are used, for example, in areas such as medical technology, tools & machinery and automotive. Key exhibitors have already confirmed their participation, including Swarowski Optik from Austria, Optotech from Germany, SwissOptic from Switzerland, Universal Photonics from the USA as well as ILT Fineworks from the Netherlands.

Looking to the future will be a central theme: the new, accompanying high-tech congress N-Tec Talks will be held under the motto “The day after Corona – prospects, opportunities and measures for the high-tech industry after the crisis”. The congress on enabling technologies took place for the first time at the W3+ Fair Wetzlar in Germany in February 2020. In the Rhine Valley, everything will revolve around the three subject areas of “Product Technology”, “Procurement and Production” and “Management”. More than 20 speakers from associations and companies, including RHYSearch, ACMIT, CSEM and Optics Balzers will present their concepts for new beginnings, which are of equal interest to product managers, developers or buyers.

In order to meet the increased safety requirements in corona times, organizer Fleet Events has put together a comprehensive package of measures that can be implemented as required. These include controlled numbers of visitors in the hall as well as wider aisles and increased cleaning cycles.

“We are confident that the event will take place in September. After the corona break, we are expecting a strong response – many companies and partners are very much looking forward to resuming personal contacts. Dornbirn will thus become the hotspot of the high-tech industry in the Rhine Valley region during the two days of the trade fair,” Project Director Jörg Brück is certain.

The venue Rhine Valley has been carefully chosen: The transnational region with its focus on research & development is one of the top ten of Europe’s 1,200 high-tech locations. This is where the cross-industry concept of the W3+ Fair is particularly effective. User sectors such as aerospace, automotive, medical technology, life science, tools & machinery benefit from the cooperation just as much as the high-tech industries themselves. At the premiere in September 2019, over 100 national and international exhibitors met with more than 1000 trade visitors. 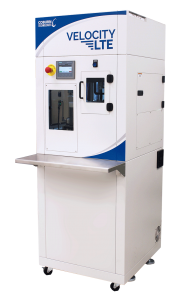 Coburn Technologies is releasing the Velocity LTE Spin Coating System — a semi-automated spin coater that builds on the Velocity coating platform and provides the control and ease of use needed by small to mid-sized labs. It offers the same coating technology of the flagship platform at a lower price and in a smaller footprint.

“The system operates in a recipe-driven environment allowing the lab to optimize the coating process for different lens parameters”, explains Coburn Technologies President Alex Incera. “For example, it offers the flexibility to create custom cure profiles to eliminate warpage on higher index materials or to adjust spin speeds and times to optimize film thickness. All of this can be process-driven directly from the user interface”.

The machine features an individual control board for each of its three spindles. Each spindle circulates automatically through three stations: wash, coat, and UV-cure. The spindle speed can be adjusted through the machine’s operator screen, offering more control of the coating process. This semi-automated system can process 80 lenses per hour with manual loading and unloading. It also features an auto-priming function and the elimination of overspray. 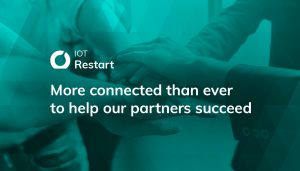 IOT has launched ‘IOT restart’, a personalized plan for customers to reactivate their operations and “return to normality”. The motto of the program is “more united than ever to achieve new successes”. The company sees teamwork, sharing information, knowledge and best practice as essential to recover in these difficult times.

The restart program is designed to offer customers technical, sales and marketing support so that they can successfully open their laboratories and recover their activity as soon as possible.

One of the most relevant aspects of this program is the local commerce support campaign since most of IOT’s current partners sell locally. The company is aware of the importance of this type of business as a cornerstone of local economies in generating employment and social welfare.

In an effort to help its partners reduce the consequences of this complex moment, the company has further increased communication with all its partners in recent months, in addition to boosting its consulting services and technical support.

“Alan Ritter was a visionary and transformational leader in the optical industry,” said Ashley Mills, CEO of The Vision Council. “While he will be missed by many, the impact of his ideas and leadership, that have been so instrumental in shaping the industry into the innovative and collaborative community it is today, will continue to reverberate through the vision community for years to come.”

Born in Queens, Ritter earned a degree in Business Administration at Ohio Wesleyan University before moving to Glen Cove, New York, marrying his college girlfriend Ellen Partelow, and joining his family business, Universal Shellac, in 1961. Ritter’s leadership of the business led to successful expansions into new products lines, acquisitions, and foreign markets. The company quickly grew, moving from Brooklyn to Hicksville in 1970. Ritter’s guidance over the decades ultimately resulted in a dynamic company, renamed Universal Photonics, with a global footprint in numerous advanced industries.

In addition to growing Universal Photonics, Ritter actively worked to advance the industry for the benefit of all. Ritter was one of the founders of the Vision Industry Council of America (VICA), which eventually became known as The Vision Council. Among his goals was to host a world class optical show in the United States and use the profits from the show to promote the industry and eliminate the proliferation of small state and city shows. Ritter and the other founding members formed VICA as a trade association of industry members who would operate the show.

Ritter was also instrumental in the establishment of Vision Expo East in New York City, suggesting the Javits Center as an appropriate venue and negotiating the first agreement with Cahners-Reed, which later merged with Reed Exhibitions, the co-owner of Vision Expo. An innovative thinker, Ritter recommended that VICA purchase Optifair, one of the only major competitor’s with VICA at the time, and use the good will from Optifair for a new show in California, Vision Expo West.

Ritter was the first chairman of VICA and served as chairman for three years. He also served on The Vision Council Board and various committees for many years.

In his free time, Ritter enjoyed golfing and spending time with his family. Additionally, he donated a great deal of his time to charitable causes such as Prevent Blindness, Diabetes Research Institute and Bethany House, among many others.

In the middle of the corona crisis, opti prepares for 2021. The entire industry is currently facing an immense challenge, and opti is also faced with new conditions due to the corona crisis and the upcoming move to Stuttgart in 2021. According to the organizers, the essence of opti, the quality and the added value for exhibitors and visitors, will remain the same, even if this is likely to look a little different to ensure a safe stage for good business in 2021 as a result of Covid-19. With opti moving from Munich to Stuttgart in odd years, visitors may expect several novelties at the international trade show for optics and design – even if opti’s concept, quality, and content are identical at both locations.

An advantage of opti’s new trade fair location is its potential for attracting extended visitor target markets to the trade show. Stuttgart, like opti’s previous sole location in Munich, is at the center of Europe’s strongest market for optics, close to both the Swiss and Austrian borders. However, the capital of the federal state of Baden-Wuerttemberg also lies a little further north, surrounded by many optical companies and their staff, and closer to the important markets in the Benelux countries and the Alsace region in France. New domestic visitor groups can also be expected.

Silmo Paris 2020 is preparing to welcome the industry back

When the theme for the 2020 edition – #FUTURISSilmo – was first conceived, it was impossible to foresee that the current crisis would bring even more meaning to the subject. Now, it is as essential as ever to accompany the optical and eyewear industry to ensure that it recovers its activities, and that it does so in a lasting way. In this context, the 2020 edition of the trade show is driven forward by the ambition to invite the profession to picture itself in the future. Silmo Chairman Amélie Morel reports that 700 companies have already confirmed their registration, which corresponds to an exhibitor occupancy rate of 80 percent. Éric Lenoir, Director of Silmo Paris, assures that the protection of exhibitors, visitors and all their own teams is central to the organizers and that they are considering all the possibilities and are ready to assume 100% responsibility for any risks.

One highlight will be Silmo Next 2020. It is organised into five spaces that are supposed to project visitors into a techno-responsible future, emphasizing the twofold transformation underway in our sector: the increasing importance of technology for both eyewear brands and opticians, and the growing awareness of the need to act more responsibly on a daily basis. The space for Corporate Social Responsibility will offer the basis for a collective consideration and a co-construction of the CSR approach for the entire industry. The Futurology space will examine the theme of techno-responsibility through the filter of the future, predicting the innovations that will gradually shape tomorrow’s optical and eyewear industry. The Trends Forum will highlight the trends and new developments of 2020 that will determine the immediate future. The Silmo d’Or will reward creativity and innovation and Meilleurs Ouvriers de France is an artisan competition held every four years in France.

Agora is designed to enable all the professionals of the industry to create new synergies and compare their points of view on the future of their jobs, products and distribution and to better understand a future that combines technical achievement and innovation with the protection of the environment and human rights.