Corporate succession is a significant topic of today. The sustainable protection and continuation of business operations for shareholders, customers, suppliers and employees are thus in the foreground. This question also arose for OptoTech as to what should happen in terms of succession for the founder, Mr. Roland Mandler (born 1954). We have taken on this issue in good time and have now found a long-term partner for the sustainable continuity and further development of the OptoTech Group with the Schunk Group from Heuchelheim. Since 1 November 2018, the Schunk Group has been the majority shareholder in OptoTech Optikmaschinen GmbH. In the future, we will continue to develop the group of companies according to the principles of enabling, idea-driven and cooperative partnership with our new shareholder.

OptoTech will be strengthened economically and technologically by the participation of the Schunk Group and thus continue to play a pioneering role in the optics market in the future. Schunk is a long-term, financially strong partner with sales of € 1.2 billion in 2017. , The technology group has grown steadily in the past and views its participation in OptoTech as a strategic and rewarding investment in the future. Schunk’s goal is to take OptoTech the leap to a new level through its economic strength and its global presence.
In the course of the participation strong synergy effects are to be used in different areas, which mean future success on the one hand and on the other hand the security and the expansion of regional jobs.
OptoTech founder Roland Mandler comments on the participation of Schunk: “With Schunk, I have found my perfect partner. Like me, Schunk also cares for the business location of Central Hesse, is also close to my heart. Schunk is a globally active and well-known technology group, which is why we, as a highly innovative technological market leader, fit excellently into the Schunk Group’s portfolio.” 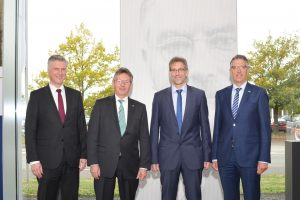 Essilor is proud to announce Professor Kovin Naidoo has been appointed Senior Vice President of Inclusive Business, Philanthropy and Social Impact. In this newly created position, Professor Naidoo will lead the Group’s efforts to reach the 2.5billion people living with uncorrected poor vision through inclusive business and philanthropy.

Most recently serving as Associate Professor of Optometry at the University of KwaZulu-Natal (UKZN), former CEO of the Brien Holden Vision Institute and former Africa Chair of the International Agency for the Prevention of Blindness, Professor Naidoo is internationally celebrated as a public health leader. This year Kovin has been recognised by American Academy of Optometry with the Carel C. Koch Memorial Medal Awardfor his outstanding contributions to the enhancement and development of relationships between optometry and other professions.

Essilor’s Chief Mission Officer, Jayanth Bhuvaraghan commented; “We’re delighted to welcome Kovin to the team. A longstanding friend of Essilor, Kovin has dedicated his professional life to delivering eye care to people in need. As one of the leading minds working in solving the uncorrected refractive error problem around the world, his unique and diverse experience will add further strength to our inclusive business and philanthropic efforts around the world as we strive towards our ambition of eradicating poor vision by 2050.”

Professor Kovin Naidoo said of his appointment; “All my life I have been driven by the passion to make a positive impact on the world’s vision. I have supported Essilor’s initiatives to reach those living with uncorrected poor vision for a long time both as a collaborator and independent adviser. Joining Essilor, an organisation that shares my commitment to the cause and personal values, gives me the opportunity to take my actions to a new scale and I look forward to working with such a dedicated team.”

Uncorrected poor vision is the world’s most widespread disability and affects 2.5 billion people, 90% of whom live in developing countries. Every year USD 272bn is wasted in the global economy due to lost productivity as a result of uncorrected poor vision. This impact is felt acutely in rural areas where awareness and access to vision care is often poor.

Jean-Claude Hache, a man of commitment

Silmo announced news of the death of Professor Jean-Claude Hache with a great deal of sorrow. A doctor of science, neuro-ophthalmologist and professor in ophthalmology, he was the first in France to develop a visual function exploration department at the CHRU of Lille, which is still providing invaluable services in the fields of healthcare and learning. His research was characterized by a diversity of approaches, from the most fundamental to the clinical and to technology transfer.
But beyond his research, Jean-Claude Hache was also a man of commitment, always eager to contribute his work to a number of institutions. A close collaborator and friend of Guy Charlot, he created Silmo Academy and was its Chairman until 2017. The two men – both honest, sincere, direct and enthusiastic – shared the same energy for improving the view of their contemporaries, as well as for building bridges between professionals, and in particular those that they grouped under the acronym 3O: Ophthalmologists, Orthoptists and Opticians.
An open-minded man with a straightforward style who remained accessible, Jean-Claude Hache was one of the foremost spokespeople for the scientific optical field. He lectured the world over and was the author or a number of international publications recognised for their pertinence.
The members of the Silmo Board of Directors and the Silmo Academy coordination team, extend their warmest condolences to his spouse, children, grandchildren and entire family. He has left a profound impression on his students, colleagues and friends.
Said Amelie Morel, Chairwoman of Silmo

Jean-Claude Hache left us with `certitude`, discretion and trust. That was his way. We would have liked to have been by his side for his last terrestrial voyage, but he probably preferred not to disturb his friends all over the world. By asking to postpone the announcement of his departure, he once again demonstrated his attentiveness, consideration and understanding for other people, for which we knew him. We appreciated the clear, firm, productive stances that he took on each of the subjects to which he was committed. Just as he investigated the functional analysis of vision, and just as he enthusiastically taught his students, he will now explore the great beyond for his family and friends. Surely he will express his thoughts and will watch over those who are still on the journey. He was the Chairman of Silmo Academy for many years, and he appreciated pragmatic,
convivial education. We were very close and had been devoted to each other since the beginning of our careers, and he passed along Silmo Academy to my care. We’ll see you again Jean-Claude, you will be with us.
Said Christian Corbe, Chairman of Silmo Academy,